This weekend, I had the honour of looking after my six year old nephew. There are two things that I believe are my greatest teachers:

Saturday morning started with baking some gingerbread cookies.  These ones are a tradition in our family.  They are those awesome chewy kind.  On getting ready to cook, not only did my nephew need the Spiderman mask from my dress up tickle trunk, he also needed to put on the singing “We Wish You A Merry Christmas” Santa hat.  What a way to begin our cooking adventure.

What followed was a very entertaining discussion.  He was disappointed because he no longer had his super powers of being invisible.  As we talked about it, I told him how I couldn’t see him anymore and he exclaimed with delight, “I got my super powers back!”

As I got the molasses out to add to the cookie dough, he said, “Hey, I didn’t know that they made gingerbread milk!” 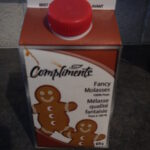 He said he was Chef Mario and I was his Chef Helper, Luigi.  We took turns at the different things that had to be done while he said, “Mamma Mia”.

Grammy was visiting as well and when she asked if she could take 12 gingerbread cookies home, my nephew’s response was, “Grammy you can only take 2 because too many cookies make you hyper!” Priceless. 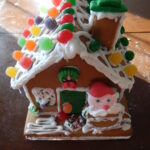 We went on to make a Gingerbread House.  I use to make the houses completely from scratch, but I realized from earlier attempts with my nieces, that the boxed sets from the grocery store are a much quicker way to accomplish the task.   Since the house needs to set before you decorate it, he got some storybook time with Grammy.  Once the house had set, we started to decorate it.  I found it amazing how he decided to make a pattern on the roof with the gumdrops.  What an excellent teaching tool that was actually fun to do!

We made shortbread cookies as well as cinnamon buns that we formed into two different shapes.  One was in the shape of a Christmas tree and the other was in the shape of a wreath.  After all that, it was time for some fresh air.  In the middle of a snow fight with my husband, my nephew said, “Is that all you got?!!”  They both came inside covered from head to toe with snow.

We had dinner and then had an early Christmas celebration to open his gifts since he was going to be with his mom’s side of the family for this Christmas. He loved the sled that we got him as well as the children’s headphones.  We ended up finishing the day by watching the movie Inside Out which is a truly fascinating and brilliant movie for highlighting emotions. 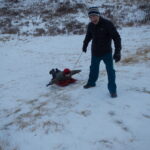 On Sunday, we woke and had cinnamon buns for breakfast and then suited up to go try out his new sled.  Although the wind was biting, we stayed outside for 2 hours.  The time flew by.  All of us had to take a turn on the sled.  He even rolled down the hill many times laughing and giggling all the way down.  He has one of those laughs that is so infectious. 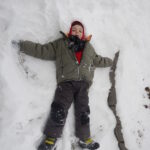 Upon returning home, we realized that we hadn’t made any snow angels yet, so we all had to make them on our front lawn before going in for some hot chocolate.  We had lunch and then his dad came and picked him up.  After he left, I had to take a good long nap.  I was played out.  My hat goes off to all you parents out there that do this day in and day out.

May each and everyone gift themselves some time to see the magic of the season through a young one’s eyes.  Please share any special stories you have of seeing Christmas through the eyes of a child.