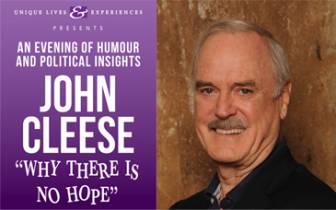 Is there really no hope? You be the judge!

I was recently gifted tickets to see John Cleese in his presentation titled Why There Is No Hope at the Jack Singer Concert Hall in Calgary.  I was looking forward to an evening with his wit and humour, but ended up receiving so much more. https://www.youtube.com/watch?v=Y6BhP20_g78

Cleese revealed that in one of his first divorces, he went to get some counselling by a very brilliant therapist.  He told this therapist that he was impressed at his competence and asked how many therapists really understood their profession. The reply….a meager 10%.  Cleese was shocked so he started asking other professions the same question.  The range ended up being anywhere from only 2% to a measly high of 20%.  That ends up leaving a whole wack of incompetent people!

Case in point, according to Cleese, are the Donald Trump supporters.  He cited this scenario as a quick example.  When a woman was asked why she supported Trump when he had been recorded denouncing women, she replied, “Trump wouldn’t have said that if he knew he was being recorded!”

Who are the Experts, Really?

Cleese went on to site a whole load of supposed “experts” who buggered things up!  He stated that Monty Python’s Flying Circus, Fawlty Towers and the 1988 movie, A Fish Called Wanda, were initially turned down by production heads at places like the BBC.  Fawlty Towers has now been named one of Britain’s greatest sitcoms.

He referred as well to J.K. Rowling’s Harry Potter being turned down numerous times by different publishers.  Ironically, it was an intern that read the script and wanted to read more.  The intern was not an expert and yet was able to recognize the talent.  Hmmmm!

He included many real-life scenarios from staying in hotels to demonstrate out right stupidity!  At one particular hotel he arrived at, he was very tired due to jet lag, so placed the “Do Not Disturb” sign on his door and went to lay down.  First, there was a knock on the door, and he was greeted by a female worker who he could not understand, who came in and did something in the room, and headed back out.  John headed back to the bed, only to get a second knock on the door.  He got up and it was another attendant that was coming to check on his thermostat in the room.  Cleese headed back to try to lay down only to have a third knock at the door.  By this point, he was ready to lose it.  He opened the door, only to find an attendant asking him if he really wanted the “Do No Disturb Sign” on his door!! AUUUGGHHH!!

Before the event in Calgary, Cleese was wanting a cup of soup.  He called down to room service to order French Onion Soup.  He was informed that they did not have any available.  Cleese was confused as he stated that it said it was available on the computer.  He then picked out another item that was listed, only to be told that it wasn’t available either!  Cleese said it was ridiculous that it was posted as available, but it was not.  The employee agreed and said that management had been made aware of the issue but had not yet done anything about it!

Science advances 1 funeral at a time!

He then put this quote up by Max Planck (originator of Quantum Theory), “Science advances one funeral at a time.” This struck a huge chord with me.  Why is it that our current medical system still operates on Newtonian Physics and has not yet evolved to Quantum Physics?  Is it because the entire health care model would have to evolve?  Cleese also noted that the 3rd leading cause of death after heart attack and cancer is medical error!  Perhaps the whole system needs an overhaul…or just more deaths of scientists!

There is hope, though. He ended everything with the Serenity Prayer which pretty much sums up his talk:

May each of us embrace this wisdom.