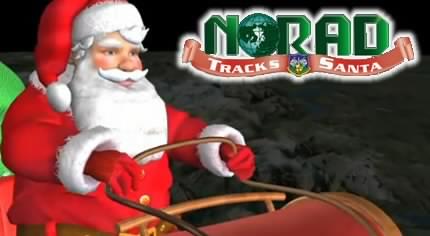 I had the amazing opportunity, on Dec 24, 2012,  to answer calls at the Norad Tracks Santa program. What an incredible experience. In 2 hours, I answered over 115 calls (4 from Canada, the rest from the U.S.). Over 114,000 calls and 2,000 e-mails were answered that night. Michelle Obama was even patched in from Hawaii to answer some calls that came in.

It was an incredibly humbling experience for me to be answering calls right alongside military personnel. They give so much, and here again they were giving of their time.

There was a board posted outside the call centre to track the most “unique” calls. I took some notes to share with you some of these questions that were asked:

These next two questions brought tears to my eyes:

The thing that amazes me even more about this whole experience was that it was started by a “mistake” in 1955.  Sears had placed an ad in the local Colorado newspaper that said the following: “Hey Kiddies! Call me on my private lphone and I will talk to you personally any time day or night.”  However, the number that was printed in the ad was off by one digit and instead of going to the Sears Santa Claus department, it went to the CONAD operations center top secret red phone line designated to ring if the Soviet Union was attacking the U.S!

U.S. Air Force Colonel Harry Shoup picked up the phone and expected the worst, but  instead he heard a little boy’s voice saying, “ Is this Santa Claus?”

At first Col. Shoup was very angry, but the little boy started crying, so Col Shoup said to him “Ho, Ho, Ho…could I please speak to your mother?  The mother relayed what had been in the ad from Sears. The Col. checked his newspaper, realized that she was telling the truth and decided to assign some airmen to answer the other calls that started coming in having them pretend to be Santa Claus.

It got to be a real joke around the command centre. On Christmas eve, when Colonel Shoup walked into work, on the glass board that had the map of North America there was a drawing of Santa, his reindeer and sleigh that his colleagues had done as a joke.   Col. Shoup decided to make a call to the local radio station and this is what he said.  “This is the commander at the Combat Alert Center, and we have an unidentified flying object. Why, it looks like a sleigh.’ Well, the radio station would call him like every hour after that and ask, ‘Where’s Santa now?’

Thus began a tradition that rolled over to the North American Aerospace Defense Command (NORAD) when it was formed in 1958. Today, thousands of volunteers man telephone hotlines and computers to answer calls and e-mails from children (and adults) from around the world every December 24th . NORAD Tracks Santa has become a truly magical and global phenomenon, delighting generations of families everywhere. What an incredible experience it was for me to be a part of this.  To read more about this program visit:https://www.norad.mil/About-NORAD/NORAD-Tracks-Santa/

Wishing you all pure magic in the mistakes!