Do you remember doing a scavenger hunt when you were young?  Last weekend I went to Barrier Lake with my 5 yr old nephew Connor, and  my husband Andy, to do a nature scavenger hunt.  I wasn’t sure how it would go over with Connor but I thought I’d give it a try.

I was going to create my own list at first, but I decided to go to Google and search “Nature Scavenger Hunt”.  I was amazed at how many templates came up to choose from.  I printed one out and explained to Connor what we would be doing. The list contained pictures and words of the following items to find: Insect, flower, grass, green leaf, brown leaf, animal hole, tree hole, branch in shape of letter, rock, log, pine cone, moss, tree roots,  animal tracks, fern and mushroom.

The fun actually started even before we left our house.  On our screen door, there was a ladybug.  Connor was so excited and said, “Hey Aunty Sus, a ladybug is an insect!  Insect down!”  I giggled at his enthusiasm over finding this first item before we had even walked out of the door.

As we headed out of the house, Connor looked at our front flower bed and said, “Aunty Sus.  We found some flowers. Flowers down!” He took this picture of them.   I laughed and told him that we were off to a really good start.

We drove out to Barrier Lake which is in Kananaskis country.  It was incredibly windy at the beginning of the hike and we all had to hold hands so that the wind didn’t blow us off our feet.

Once we got to a the sheltered area, we were able to start looking for our items again.  We came across this patch of grass of all heights.  Connor said, “Grass down!” and then snapped this picture.

We then came across many different colours of leaves all at once.

Connor was so pleased.  His excited voice said, “Red leaf down! Brown leaf down!  Green Leaf Down!”  He was having so much fun taking pictures and being an explorer out in nature.

One of the things that really stood out for me was that we needed to find an animal hole.  Connor found lots of holes along the trail from where rocks had become dislodged and asked if it was an animal hole. We told him that it was just a place where a rock had been which had been dislodged by rain.  Connor would then start looking for the right shape of rock to fit back into that hole.  He sometimes had to make a few different attempts, but he always ended up finding the rock that had been dislodged.  What an incredible way for children to learn their shapes and how to match things up without realizing they are learning!

We next found a branch in the shape of the letter “Y” and Connor said, “Branch down!”

This was followed by finding a rock.  Connor took the picture and said, “Rock down!”  He was so excited that we

were finding so many things so quickly into our hike. We actually even found a heart shaped rock later on the trail

Next, we came across a log, and these words from Connor came as enthusiastically as the first item we had found. “Log down!”  This was indeed a real game for him.  I honestly don’t remember having so much fun finding all the items when I did a scavenger hunt when I was young.   Mind you, there weren’t digital cameras back then to help you log all the items that you found. Seeing how happy and curious he was about every thing left a smile deep in my heart. 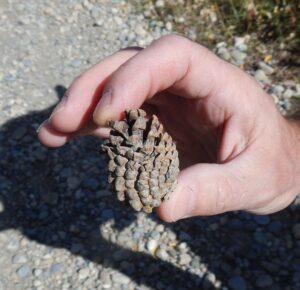 We came across some clover which wasn’t even on our list to find, but it helped to create some discussions about different plants.  We talked about the red rose hips and how they used to be wild rose flowers and they had turned into rose hips to provide food for the animals and also to reseed.  We opened one up to show the seeds inside the rose hip.  Connor was amazed at how many seeds were in there.

We then came across a pine cone and talked about how pine cones come from pine trees and and Connor said, “Pine cone down!”

We then came across some beautiful green moss.  We had Connor feel it and he could not get over how soft and spongy it was.  “Moss down!”

Soon, our tummies were grumbling and we needed to have some

lunch that we had packed for the hike.  As we found a tree log  to sit on, we also came across some tree roots.  “Tree roots down!” 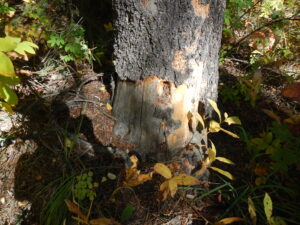 While sitting having our lunch on that tree log, we saw that there were tree holes in the tree right next to us.  In fact there were three of them!  “Tree hole down!”

As we walked further

along the trail, we found something that definitely was not on our list. When we told Connor that those were scratches from a bear he wanted to know why the bear had done that.  We told him that the bear was showing that this was his territory and that we were in the bear’s home so we would have to be careful as we were walking around.  We talked about what we should do if we saw a bear as well.

We then needed to take an energy break for Connor and as we were sitting, we finally saw the animal hole that he had been looking for.  We thought that it was a hole from a ground squirrel.  “Animal hole down!”

and that had these perfectly marked woodpeckers holes on it. 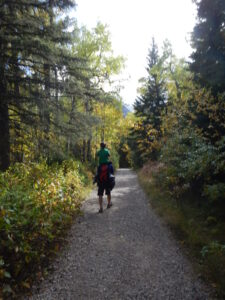 The day was full of a lot of adventure and Connor decided that he needed to get a piggy back ride for the hike back.  Now that is the way to travel.

When we had almost returned to the car we found one of the remaining items on our list.  Animal tracks.  They weren’t bear tracks thank goodness, they were just dog tracks, 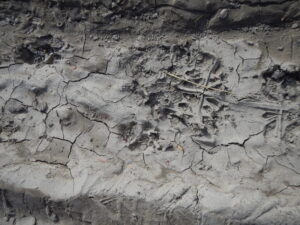 but definitely worth taking a picture of.  “Animal tracks down!”

We had found everything except for mushrooms and ferns.  I told Connor that I knew where some were back at my home,

The minute we got into the car, Connor was out cold and slept all the way back to our place.  He woke up to walk into the house and then plopped himself down on the couch and was out again for another two hours. The exercise and fresh air had totally worn him out.  It was an early night putting him to bed.  Upon waking the first thing he said was, “Aunty Sus, we have to go find the fern and the mushrooms.”  I was impressed that he remembered.

My back garden is full of ferns in one corner, so we went out and snapped a picture of them.  “Fern down!”  The enthusiasm was still as fresh as when we had started the day before.  We had the bonus of finding a white feather as well.

Now the best was definitely saved for last.  We went to a place where I knew there were a lot of mushrooms.

Connor declared, “Mushrooms down!”  We had done it.  We had found everything on the list.  He was so proud of his accomplishment.  We then got to go through all the pictures and do a sequencing exercise in terms of what we found first right through to the very end.

I am a huge advocate for nature being one of our greatest teachers. This exercise with my nephew showed me just what a great teacher nature truly can be if we just take the time to slow down, look and listen.

Have you gone on a scavenger hunt lately?  You’d be amazed at how much fun you can truly have.  Seeing nature through the eyes and wonder of a five year old truly did help make this be a most memorable event. Happy trails to you.