Yesterday, September 25, I was blessed in learning the proper way to pick and honour Sage from Kerrie Moore who works at the Native Centre at University of Calgary as a an Integrative Healing Therapist.  She is also Cree-Metis from the Muskoday Reserve in Saskatchewan.

It was a beautiful fall day to do this, complete with the sun shining and colours dancing along the rolling hills of Nose Hill Park.  A butterfly fluttered amongst us and a hawk flew overhead as we sat in circle learning from Kerrie.  The setting could not have been more perfect.

Kerrie began the teaching by sharing the fact that we are equal with all things including nature.  There is no hierarchy as all beings, stars, plants, animals, etc have come from love.  She shared how the tobacco plant had offered itself to the “two-legged’s” to be used to pray.  You can get tobacco from a local convenience store to use in offering.  I found out from another person that tobacco was never meant to be inhaled, it was only meant to be used to connect with spirit. 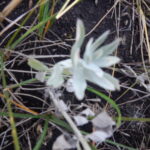 The location we were at had an abundance of Sage.  There were both female plants – which have flowers on it, and male plants – which just have the leaves and are referred to as Buffalo Sage. There are other plants that can look like Sage, so it is important to make sure that you are picking the right plant.  Rubbing the leaves and smelling the plant will help you identify the Sage. The Sage was intermingled with loads of thistle.  Kerrie shared that thistles have great medicine in them as well, and that often, what we call weeds end up being the greatest medicines. That struck a huge chord with me!

Kerrie told us that in her teachings, only women and children gather Sage and that the plant is considered to have feminine energy.  It is the only smudge that women can use during their moon time. We also had to wear a skirt.  The meaning behind the skirt would be a full day course on its own, but as a quick snapshot, the skirt is similar in shape to the teepee which was considered to be the women’s domain.  The skirt is also the same shape as our womb.  It implies that there are boundaries which must be respected.

It is important to smudge first before picking Sage. The key in picking a plant is to show respect to it by honouring its’ spirit, and it in turn will show respect back.  First you sprinkle tobacco by the Sage as an offering.  Kerrie then said to say, “Thank you for offering your medicine.  I ask that you come with me for healing.”  The plant is pure love and by us acknowledging it, we are connecting with that powerful energy. (You can do this same process with all plants.)

Next, you twist the Sage until it comes off.  Do not pull at the root, so that the Sage can grow again next year.  Sometimes the root will come, and that just means that it was ready to let go.  You can gather the Sage in cotton cloth (1 metre by 1 metre) and swaddle and carry it like a baby when you are done picking.

I am not allowed to talk about the actual ceremony itself as this is a very sacred teaching.  What happens in the ceremony, stays in the ceremony! I will share though that for me, there was an overwhelming sense of community and connection in being gathered in a circle and in seeing women and children honouring the sage and picking it.

To dry Sage once home, just lay it flat.  It dries quite quickly.  Do not remove the leaves until you are ready to use it, as your energy gets absorbed into it.

I feel incredibly blessed for having learned how to properly honour the picking of the Sage and being part of this ceremonial women’s circle. The Native Centre offers this ceremony every September.  They also offer numerous other teachings and events like the Cree Grandmother’s Tea which is held the third Tuesday of each month from September through to April.  For more information, visit: https://www.ucalgary.ca/nativecentre/

2 thoughts on “The Sacred Gathering of Sage and Women”