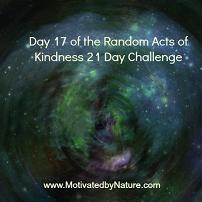 Yesterday was an amazing day for me with what occurred in this challenge.  I asked myself, why was it so different yesterday?  Was it because:

I truly believe that it was ALL of the above.

After the complex issue was resolved so quickly, I decided to consciously go out and do my Random Acts of Kindness.  I was planning to do only one thing….but it absolutely snowballed and I decided to stay with the energy and just “be”.    Here is what happened:

So, that was Day 17, I will be interested to see what Day 18 has in store!  I would love to hear your feedback or ideas on what you do for Random Acts of Kindness.  There are just 4 days left in this challenge for me.